Saavira Kambada Temple otherwise known as Tribhuvana Tilaka Cudamani is a renowned Jain temple in Moodabidri. This temple is also called as “Chandranatha Temple” as it was constructed in honour of Chandraprabha tirthankara and his eight foot idol is worshipped in the temple.  Moodabidri town is also quite famous for its eighteen Jain temples and the finest of all being Saavira Kambada Temple.

The construction of the temple started in the year 1430 by Devaraya Wodeyar and it took some 31 years to complete the entire temple. In the year 1962, several additions were made to the temple. This temple is also quite famous for its thousand pillars and is also known as Thousand Pillars temple. It was estimated that the total construction cost of the building was 9 crores for this magnificent temple. The temple was constructed in phases and in the first phase the sanctum sanctorum of the idol of Chandranath was installed.

During the second phase, the spectacular prayer hall consisting of innumerable pillars was installed. During the last phase, the manasthamba was erected by Queen Nagala Devi. The 60 foot high Manasthamba is the centre piece that is awe inspiring. For the Jains, the idol of Chandranatha Swami in the sanctum is considered as sacred. This temple is worth paying a visit due to its architectural beauty. The overall construction of the temple was supported by various rulers, Jain Bhattakara Swamiji, the common people and merchants.

The temple is also quite popular for the stone sculpture, Mahadwar, Chitradevi, Bhairadevi, Namaskara and Garbhagruha are the mantapas found here. The famous sculptural art piece is the Navanaari Kuinjara which though resembles like an elephant is actually is a depiction of nine dancers. The temple is known for its thousand pillared prayer hall. Each pillar comes with Vijayanagara styled carvings which adorns the pillar. It is also said that none of the pillars are identical to each other. The Dhavala texts and several palm leaf manuscripts that are of historical importance are preserved in the Jain monastery (math). One will also find the history of the temple carved on its wall. 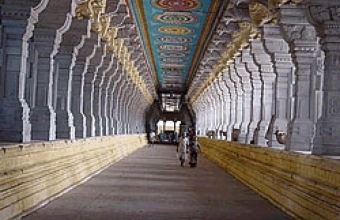 The temple comes in three separate stories. However, the devotees are allowed into the upper floors only once in a year.  Though the temple is one of the biggest and oldest temples in Asia, the upper storey remains a secret. The visitor can experience the grandeur as well as vigour that becomes the hallmark of the era that is lost in the sands of time.

The temple is not only renowned for its pillars as well as carvings but also for the calm and serene ambience. From the beautiful carvings and the accurate lines, one can learn about the craftsmanship of then sculptors.

By Road: From Mangalore, Moodabidri is some three kilometres away. Those who want to visit Moodabidri can take private as well as public buses to reach the town from cities like Udupi, Bangalore, Mangalore, Hubli, etc.

By Air: The closest airports are Bangalore and Mangalore. From the airport, one can hire a local taxi or board a private/government buses to reach the temple.

By Rail: The nearby railway station is located at Mangalore.