From the year 1880, the game of tennis has been played with great enthusiasm by the colonial officers and the distinguished civilians in India. After the British took over Mangalore, tennis as a game was played among the British officers. India has quite a few popular tennis players who have played in many grand slam tournaments and made Indian’s proud of their win. The AITA or All India Tennis Association is the main governing association for every tennis tournament played in India.

The AITA was established in 1920 and is an active member of Asian Tennis Federation and International Tennis Federation. The Indian team in the Davis Cup tournament has made Indians proud and won many glories both abroad and in India. The AITA is also plans the various tennis tournaments in India and schedules the various matches that Indian players play in the international front. Managalore is an abode of sports and it regularly conducts many games and tournaments of tennis regularly.

This academy was established to create the future Sania Mirza and Vijay Amritraj of Mangalore. There academy has two concrete courts and is free for students who study in the Canara Group of Schools. For other students the tennis court can be booked at Rs 100/-per hour and trained tennis staff is present to teach your child. The timings for practice are 6:00 am early morning to 10:00 AM mid morning and again 3:00 PM in the early evening to 6:00 PM. For adult students wanting to learn the game of tennis, the rate goes up to Rs 300/- an hour.

Ramakrishna Tennis Club is located in the Kadri area of Mangalore. Apart from regular tennis coaching, the club in association with Nike-Bhupathi Tennis Club organizes various tennis coaching camps which are attended by aspiring tennis students in Mangalore. The coaching is undertaken by Ganesh Babu of Mysore and he was a renowned player of UAE. He is a certified coach by Nick Bolliterei Tennis Academy. His contact number is 9986679160. 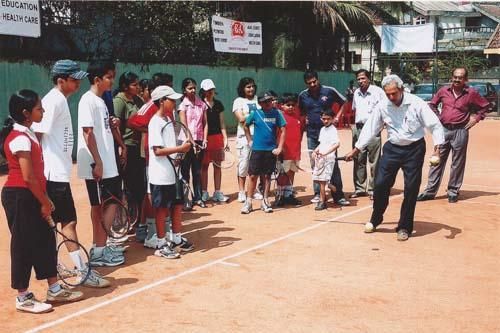 Kids at a practice session at Ramakrishna Tennis Club
The popularity of tennis as a game in Mangalore needs to be encouraged both by the local Mangalore administration and by the schools in general. The climatic conditions of Mangalore are appropriate for a game of tennis but more encouragement needs to be made before it reaches height like its big cousin Bangalore.