Sri Mangaladevi Temple is an ancient temple that is located in Bolar which is 3 Kms away from Mangalore in the state of Karnataka. The local people believe that the name Mangalore got raised from the God Mangaladevi who enriched this temple in Mangalore. This temple was built during the tenth century with the memories of the famous Rajmata of Malabar who is said to be accompanied with Yogi Matsyendranath, a famous Guru from the Nath tradition.

The sculpture of the Lord Managaladvi is the earliest Durga sculpture that was created in the South Kanra District. This temple is a famous holy place in India and many people from all over India gather at this temple during the festive occasions to get the blessings from the God. One can get stunned by witnessing the architectural brilliance of this temple that was constructed during 986 AD. It does portray the hard work of the architects in sculpting the temple. This temple finds a place in the top places of tourism to visit in Mangalore and welcomes loads of tourists every year. There are also many small and big shops in and around the temple area to help its visitors enjoy shopping purchasing gifts and spiritual related stuff. 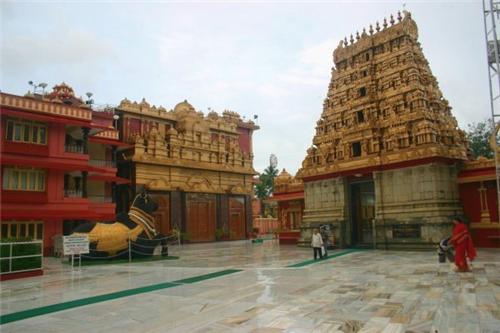 Kudavarma is a famous king in Tulunadu and he belonged to the Ahepa dynasty. He was the king who was ruling this place. During his ruling time, two holy saints named as Gorakanatha and Machendranatha came to this place from Nepal. They reached Mangalapura by crossing across the river Nethravathi. The place that was crossed by these two saints were called as Gorakdandi.

They found a place nearby the banks of Netravathi, which was once known for the center of activities for Kapila. He made his hermitage from this place and it was the great center for education. The king after hearing about the arrival of two saints, he visited them in person. The king introduced him as the King for Tulunadu and he offered all the respects and help for the two saints. The saints were very much pleased with the offerings from the kings and they told a secret to the king. It was about a hallowed place that was sanctified by the holy saints activities in the past. They requested the king to grant them the land so that they can build their heritage and turn it into a center with various religious activities.

Origin of the temple

Kundavarma was surprised to hear that his lands have  got such a hoary history behind it. From the saints, he had learned that there was a temple in his land that was dedicated to the Lord Mangaladevi. He heard the story of Andasura, Vihasini and Parashurama and the various temples built by them. The saints took the king to the places where all the historical events took place in the past. The saints asked the king to dig at a place and relieve the linga that symbolizes Mangaladevi and they asked him to install it in a shrine with Nagaraja, in order to protect it.

The two temples namely Kadri and Mangaladevi are maintained in the same way. The hermits of the Kadri Yogirajmutt visits Mangaladevi temple during the first days of the famous Kadri temple festival and they do offer their prayers and silk clothes to the God in this temple.

All the tools and weapons are worshiped during this day as it marks the killing of the cruel demons by the God Durga. During the ninth day, many number of devotees participate in the event named as Rathothsava. The ninth day of Navarathri is also known  as Mahanavami. The God is decorated well and they keep the God mounted on a grand chariot. The chariot can be pulled by using thick ropes. The procession goes towards the Marnamikatte in which the God is worshiped by the people.

The interiors of  Sri Mangaladevi Temple decorated for an occasion

How to reach this temple

By road
The temple can be easily reached through the best transport system available here. You can find frequent bus services, taxis and auto rickshaws. Get into the bus number 27, 29A and 27A to reach this temple.

By rail
If you are traveling by train, then the Mangalore Railway Station is the nearest railway station to reach the temple.

By air
Get down at the Mangalore International Airport and then take the road or rail services to reach the temple.