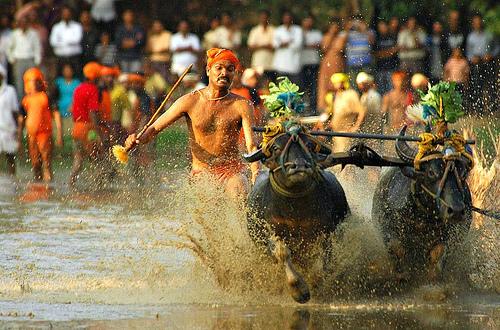 A Rider with his bulls in Kambala
Kambala is a sort of buffalo race that is organised in paddy fields that are filled with water. Korikatta or cockfight is also a popular sport in Mangalore. Both Kambala and Korikatta are traditional sports that are very simple and they are a source of great entertainment for the rural people of Mangalore. The track that is used for the sport called Kambala or buffalo race is a normal paddy field that consists of mud and slush. The race takes place among two pairs of buffaloes where each pair races in the wet fields of rice and the racing buffaloes are controlled and managed by a farmer who lashes the whip. In the past, the pair of buffaloes that won the race was presented a cluster of plantains and also a coconut but at present the winning pair of buffaloes is rewarded with silver and gold coins. Tourists of Mangalore throng the city every year to witness the live action of these sports.

Among the modern forms of sports, cricket forms the most important and also the most famous sport in Mangalore. Mangala Stadium which is the only full-equipped cricket stadium of Dakshina Kannada is located in the city of Mangalore. The stadium also consists of a sports training unit that has been set up by the Sports Authority of India or SAI. Central Maidan located in the city of Mangalore serves to be another very important venue of sports in Mangalore that hosts several types of domestic tournaments and even a number of collegiate and inter-school sports tournaments. The most popular organization for sports in Mangalore is The Mangalore Sports Club or MSC that has also been elected and included as Institutional Member for Mangalore Zone of Karnataka State Cricket Association or KSCA. Foot ball is another sport that is very popular in Mangalore and this sport is found to be played in the grounds or the maidans usually. Nehru Maidan in Mangalore serves to be the most well-known venue for the conduction of domestic sports tournaments in Mangalore.

Children practicing their cricket in the playgrounds of Mangalore

The most well-known indoor sport in Mangalore is Chess. The city of Mangalore serves as the headquarters of the South Kanara District Chess Association or SKDCA. The South Kanara District Chess Association or SKDCA has successfully hosted a couple of chess tournaments that were held on All India basis. Squash, tennis, billiards, table tennis, golf and badminton are the other important sports that are played in various gymkhanas and clubs of Mangalore. Pilkula Nisargadhama is an incorporated theme park in the city that also possesses a golf course of nine holes and is considered to be fully functional. This theme park is located at Vamanjoor in Mangalore. Budhi Kunderan, the former wicket keeper of the India cricket team belonged to the city of Mangalore and even Ravi Shastri, the man who represented the international cricket of India for many years in the form of an all-rounder and even captained the Indian cricket team is from Mangalore. 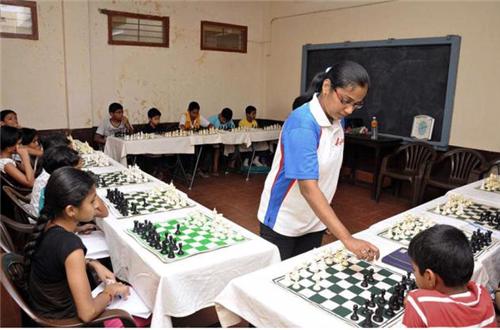 Kids of Mangalore taking part in a tournament of Chess 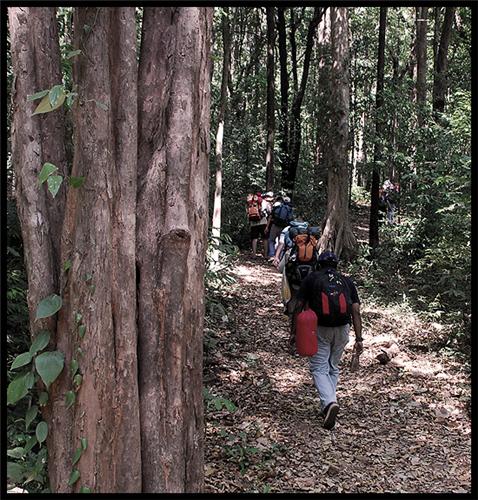 Trekkers enjoy trekking along the trekking routes in the city
Kudremukh National park located at Kudremukh in Mangalore serves to be a paradise for trekkers because of its numerous trekking routes that pass through the undulating hills. People need to obtain entry permit for the purpose of trekking within the park and this has to be obtained from the Deputy Conservator of Forests or Range Officers.

In Shiradi Ghat there are some places that can be used for trekking namely Venkatagiri, Udayagiri and Mugilagiri Hills. Kodagu area in Mangalore is also an area that is considered to be the perfect place for trekking where people can always climb the highest peak in Mangalore namely Tariyandamol. This place even possesses other peaks like Kumara Parvatha and Brahmagiri close to the Kodachadri and Kukke Subrahmanya ranges and even Mullayyanagiri. 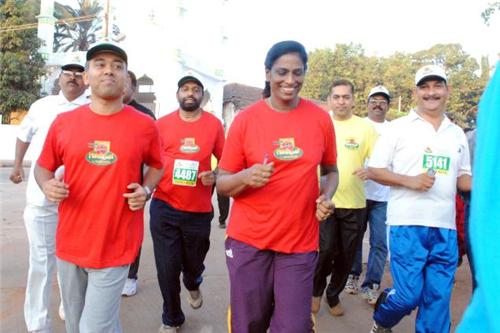 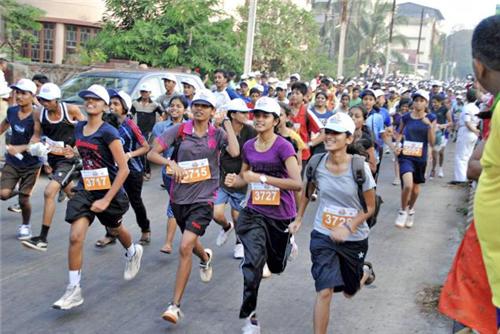 School kids run enthusiastically at the Marathon Race in Mangalore held last year
This marathon race took place in the year 2013 and it was sponsored by the Nitte in association with the Corporate Bank. The event was organized by the Dakshina Kannada Athletic Association. The 21 kilometer half marathon was flagged by Mr. Vinayaga Hedge, President of NITTE Educational Trust. The 3 kilometer run was specially made for the high school girls and boys and it was flagged by Mr. Wilson D Souza, Deputy Speaker of Karnataka State Legislative Council.