The Rosario Cathedral is also known as Our Lady of Rosary and is one of the oldest churches in the Roman Catholic Diocese of Mangalore. This is the first church constructed for the Roman Catholics and historically this is the only church that is meant for high caste Mangalorean Catholics. Our Lady of Rosary, Mangalore is the first church constructed by the Portugese on their arrival at Mangalore for the first time. This church was constructed in the year 1568 and the Portugese won the battle at Mangalore. The current church stands on top of the old church and also has Portugese’s royal stone emblem which bears testimony to the Portugese victory in the battle and is found at the entrance of the cathedral. 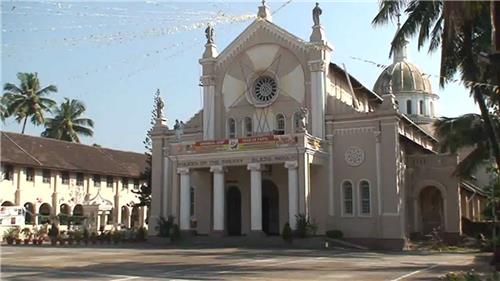 In the year 1784, the church was destroyed by the forces of Tipu Sultan. Once the prisoners of captivity were released, they started the work for rebuilding the church. This was started in the year 1813 with an aid of Rs 4,000 granted by the English government. The funds were utilised to rebuild both Rosario cathedral as well as St Milagres Church. Bishop Ephrem ODC has granted the church with a rank of Cathedral.

However, in the year 1910, then Fr Henry I Buzzoni S J demolished the entire structure and started the work on building the current one which could be raised to the stature of a cathedral. This is the only church in Diocese that comes with a dome that covers entire sanctuary. The cross found on the dome of the cathedral was used as a beacon to all the mariners.

The main alter of the church was consecrated by Bishop Perini on 3 April 1924 who was the Administrator Apostalic. Fr Buzzoni also installed belfry tower and also installed four bells that were imported from Italy. This led to the construction of many parishes over a period of time namely Urva in the year 1865, in 1888 Kulur, Bejai in 1912, in 1914 Bendur, Cascia in 1935, in 1939 Derebail and in the year 1950 Thannirbavi.

Many schools were also part of the church. In the year 1858, the first church St Mary’s School was started which was later converted as Rosario School which is now actually a Management College.  Sisters of St Joseph of Apparition started a school in the year 1859. The congregation moved to Cannanore, the Carmelite Teritaries took charge of the school. It is also to be mentioned here about the Minor Seminary Gladsom Home for students also join the seminary so that they could be inducted into the Diocese of Mangalore.

How to reach Rosario Cathedral

By Air: The nearest airport to the Rosario Cathedral is Mangalore airport and from there the tourists can hire a taxi or car or even take public transport to reach the cathedral.

By Rail: The nearest railway station is the Mangalore railway junction. All major trains will stop here. From the railway station, the tourist can avail the services of taxi or car or public transport system to reach the cathedral.

By Road: Mangalore city is well connected by roadways to all major cities of India. The tourists can easily travel through cars/buses and can reach the cathedral comfortably.