Roadways in Mangalore are an integral part of the transport system in the city as it is integrated with teh roadways of other cities, making tourists and locals reach any place without any issues. Mangalore is nestled in the backwaters of Nethravathi and Gurupura and both these river surround the city. The river Gurupura is located in the north of the city, while Nethravathi meanders in the southern area of the city.  If you measure Mangalore’s roads in kilometers it would be over 888.9 km. There are a few national highways which pass thru the city like NH13 and NH48. Mangalore’s main roads are the KS Road which runs thru the heart of the city and the Falnir road which is situated near the southern parts of the city. On both these roads important private and government offices are located which adds importance to these roads.

NH-66
The NH-66 is an important Indian national highway. This highway connects Pondichery to Krishnagiri. The highway starts in an area in Pondichery called Indira Gandhi Square and ends at Krishnagiri after joining NH-46 there. The total length of the highway is 214 km and passes thru Mangalore city in the direction of north-south. 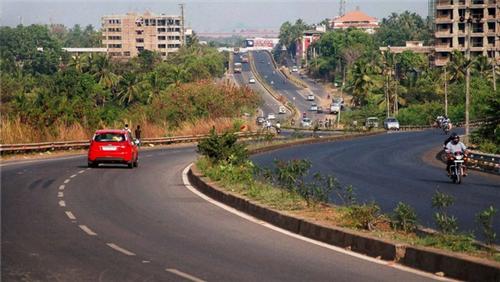 National Highway - 66 or NH-66 in Mangalore is 214 km in length
NH-48
This highway runs inside the state of Karnataka. It is the main connecting road between Bangalore and Mangalore, the two prosperous city of Karnataka. The total length of the highway is around 328 km and the highway road between Bangalore and Mangalore is popularly known as B.M and B.H which means Bangalore and Hassan road. The rush in this highway is high and there is various movements of goods which travel to various parts of Karnataka from the New Mangalore port. This highway faces serious congestion problems during the monsoon season in the months of June to October. The NH-48 starts in Kanakanady in Mahaveer circle and it runs into the main areas of Bangalore.

NH-13
This highway is now named as NH-169 and runs from Mangalore in Karnataka to Solapur in Maharashtra.  This highway is quite long and measures around 708 km. The original highway route ran from Solapur to an area known as Chitradurga but later it got extended to Mangalore. Maharashtra and Karnataka are the two main states of NH-13 highway.  Since this highway is important the National Highway Authority of India has sent recommendations to the central government to widen the area from Karkalla to Mangalore into a 4 lane highway. The accepted proposal is that the highway area between Moodbidri to Mangalore would be converted into four by lanes and from Moodbiri to Karkalla into dual lanes.  This would help in clearing traffic congestion in times to come.

NH-234
This national highway begins in Mangalore and travels thru Andhra Pradesh, Vellore, Tamilnadu and finally ending in Villupuram in T.N state. The forest depart of the area is very strict and does not allow roads to be built in the eco friendly Western Ghats area. But the road network is necessary thus it has been planned that a tunnel would be built by a Japanese company in the Shiradi ghat area of the highway.  This tunnel once built would reduce the time of travel up to three hours and save on fuel too. This tunnel would help the various industries built around the area to enjoy good business and productivity.  Large trucks carrying important goods can also travel thru this tunnel.

In the near future Mangalore City Corporation or MCC has planned to widen and upgrade five of its main roads. These roads are Kadri to Nanthoor Road, Bunts Hostel to Ambedkar Circle Road, Lady Hill Circle to Bokkapatna Road, Mannagudda to Bokkapatna Road, and Car Street Junction to Ferry Road. All these roads would be converted to four lane roads and create hassle free road travel for the residents of Mangalore.

Also important goods related to businesses from New Mangalore port like LPG, petroleum products, coffee and cashew are transported thru these highways to various other parts of the country. Regular maintenance and care is needed of these highways which would ensure that they efficiently serve its people in Mangalore and around it.