Mangalore has grown to be an important city of Karnataka because as it has been converted into an important tourist destination in Southern India. Also the presence of New Mangalore Port has created great growth for its economy. One of the most essential elements necessary for business growth is the presence of an efficient transport system. Mangalore is blessed with an efficient transportation system thru roads, air and railways. The railways system in Mangalore has grown over the years and this has helped railway passengers to travel to Mangalore for both personal or trade reasons.

Earlier, when you traveled to Kerala, the Mangalore Railway Station would be the last station which connected Mangalore to Kerala. There was no presence of any railway track between Mangalore and Hassan area. An initiative was taken and a meter gauge was constructed between Hassan and Mangalore. Later on the meter gauge faced a few problems and has to be replaced by a broad gauge line. From 2006 this line was also open for freight traffic. Passenger train started moving in this tract in 2007, after the first train was flagged of to Bangalore by the then Railway Minister Laloo Prasad Yadav.

The code for Mangalore Central Railway Station is MAQ. This is the main railway station in Mangalore and of the important railway stations of Karnataka. Trains from this station depart to various parts of India like Mumbai using Konkan Railways and Chennai, Bangalore using Southern Railways. The first railway connection was established in Mangalore under the patronage of the British in 1907. Passenger trains started operating in this railway station from 2007 onwards. 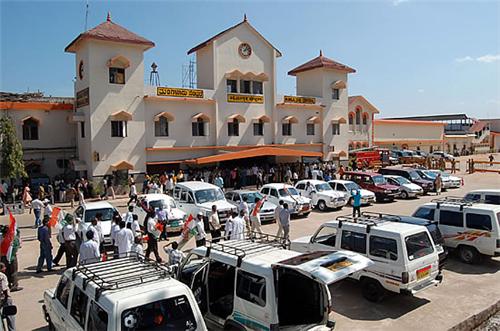 The second railway station of Mangalore is located in Kankanadi. This railway station falls under the Palakkad Division of Southern Railway. This station has trains which connect to other parts of India like Maharashtra/Goa, Mangalore Port in the north and in the east Bangalore-Chennai. It is one of the most buy railway stations in South India and many important north and south trains traveling to northern and southern part of India cross the Mangalore Junction.

This station was earlier called Mangalore Railway station but there was a lot of confusion between the two station names and hence it was renamed as Mangalore Junction. Most trains cross it as it is an important junction where there is a change of TTE and for completing regular daily operations like filing water and checking the train for ant problem. Mangalore Junction also has most trains stopping by as many trains do not travel up to the Mangalore Central railway Station which is situated in the heart of Mangalore city.

The third railway station of Mangalore is situated in its suburb area of Surathkal. This city is situated on National Highway -66 and falls under the district of Dakshina Kannada. The administration of the area is supported by Mangalore City Corporation. Passengers getting down in this station are tourist that visits the Surathkal beach or students from National Institute of Technology Karnataka situated nearby. There are various private auto rickshaws, taxis and public buses available which could transport people to Mangalore city.

The efficient operations of Mangalore’s railways stations has enhanced rail travel for its passengers from Mangalore and rail passengers traveling to Mangalore from other parts of India. This has had a positive impact on Mangalore’s growing economy too.