Shree Ananthapadmanabha Temple is located in the Kudupu village in Mangalore city in the state of Karnataka. Kudupu is a small village that is 10 Kms away from the main Mangalore city. It is situated exactly on the Mangalore-Moodabidri route. The temple is completely dedicated to God Anantha Padmanabha, who is said to be the other form of God Vishnu. The temple is also famous for serpent type of worship. The Annual Shasthi festival is one among the famous religious ceremony that occurs during the month of December. Nagarapanchami has been yet another festival in which milk is being sacrificed to the God Naga with a great devotion. 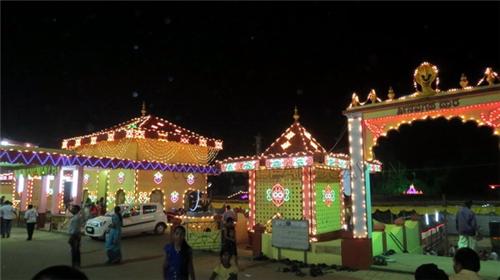 Festive look of Shree Ananthapadmanabha Temple on the occasion of Nagarapanchami 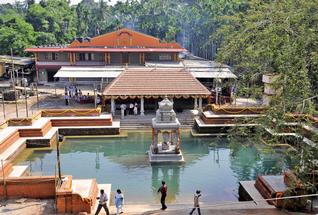 Bhadra Saraswathi Thirtha at Shree Ananthapadmanabha Temple
Story behind the Origin of the temple
The king named Shursasena made some wrong actions and sins that were against the act of getting humiliated. The Brahmi Vedic scholars advised him to cut his hands down by himself as it was the same hands that made all the sins in his life and to worship Lord Mahavishnu. Although he replaced two golden arms as he had cut down his hands to get rid of his sins, he got so much worried that he has lost both of his hands.

King’s life changed at Bhadra Saraswathi Thirth
The king once reached a peaceful and holy spot named as Bhadra Saraswathi Thirth while he was hunting for animals in the wild. The serene atmosphere in the surroundings of the Bhadra Thirtha attracted the King. He settled in this place and began to worship the Lord Mahavishnu. As his worship turned intense day by day, Lord Mahavishnu made his appearance in front of him. The Lord Mahavishnu asked the king to construct at a temple at the same place and he would get back his arms once the construction of the temple gets completed.

King's hands were restored
After hearing this, King Shurasena began to construct the temple. The architects, sculptors were used during the building of the temple. The temple was nearing its finishing stage. One fine morning, a divine voice was heard from the clear sky asking the workers to stop constructing the temple and leave it as it is. The king  got his arms back and spent the rest of his life working the Lord Mahavishnu. As the temple was stopped while constructing it, one can never find the ornamental portion on top of the sanctum. 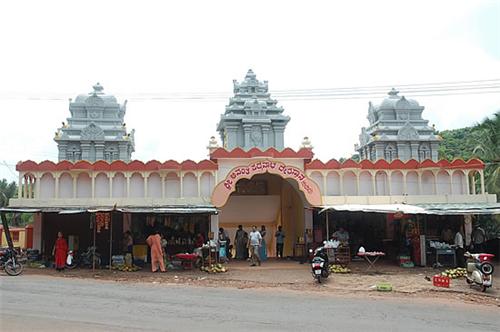 The main entrance of  Kudupu Shree Ananthapadmanabha Temple in Mangalore
Celebrations and Poojas
The following are some of the most celebrated poojas and festive occasions in this temple. Many people from all over India visit the temple during these occasions and they would get the blessing from the God.

How to reach Shree Ananthapadmanabha Temple