Mangalore is highly known for its contribution in the field of sports in the recent times. Its people are highly enthusiastic about sports that they consider signing up for all classes to spend their free time wisely. Karate is a famous martial art that was originated from Japan. Karate is a very popular martial art and many people have learned it to defend themselves from their enemy. In karate, one can punch, kick, elbow strike and knee strike the opposite person. India has been following Karate for many years and many karatekas have been emerged in India in the past few years. Mangalore being the most wanted city in the State of Karnatatka has got many karate centers that teach Karate to people who visit them. These institutes have got the best Karatekas and they are experts in teaching Karate to them. Anyone can learn karate, irrespective of their ages.

The awareness to learn Karate has been widely spread by many institutions that teach Karate in Mangalore in an effective way, which has made many parents to join their kids in the Karate institutes. The main aim of the karate institutes in Mangalore is to train the students in terms of physical and mental fitness. The mental growth in a person will be stable when he or she is said to be learning Karate from the professionals. The karateka is the teacher who teaches Karate to the students. Such karatekas in Mangalore are highly trained and skilled in order to spread the famous martial art in the city of Mangalore. Discipline is the most important thing that every human being must follow in their life. People who know Karate will be a disciplined person in their life. The Karate classes in Mangalore are widely available and they do teach Karate for a low fee rate. 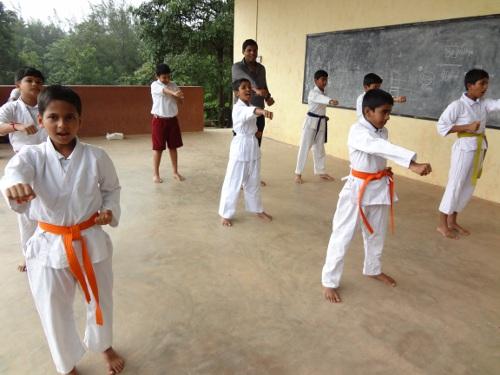 Kids practicing the martial art at a Karate Class in Mangalore
The Indian karate has got nearly 100 techniques and eight different katas. These techniques can be learned by joining with the karate training centers in Mangalore. Some people take it as a hobby while some take it as their profession. Many people who started learning Karate in the past are now the Karatekas and they have been representing Mangalore in many Karate competitions that happens in and around India. Learning Karate can make anyone to turn into a warrior. Some people learn Karate to become a fighter, yet, Karate is not made to make anyone turn into a fighter, it is made to make everyone turn into a warrior.