Mangalore is a city that is considered to be the main port city of Karnataka state. People who live in Mangalore are known as Mangaloreans in the English language, Kudalduru in the Tulu language, Mangalorekar or Kodyalkar in the Konkani language, Maikaaltanga in the Beary Bashe language, Manglumavaru in the Kannada language and Kodialgharano in the catholic Konkani language. Multicultural hodge podge is found in Mangalore where there are people from diverse linguistics, religions and migratory classifications residing together. 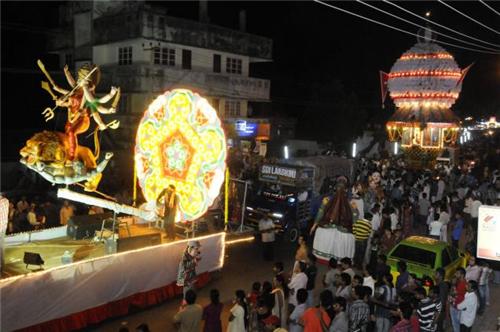 The linguistic and the population of Mangalore is extremely varied. The city possesses a profile that is multi-religious and it is only because of this reason that Mangalore serves as a melting pot of traditions and cultures. Some truly exclusive cultural traditions of the city are found in Krishna Janmashtami, Karadi Vesha which is a dance form and Yakshangana. The Dasara festivities in Mangalore are also very renowned for the royal splendor that they possess and this is the reason why these festivities are able to attract a large number of people from all over the world.

The Tuluvas in Mangalore practice several drama performances and Yakshangana which is a dance that is carried out for an entire night. All these traditions are practiced with enormous fanfare by the Tuluvas. Piliyesa is very unique and exclusive type of folk dance in Mangalore that is quite fascinating for the old and even for the young. Piliyesa is performed throughout the Krishna Janmashtami and Dasara celebrations in the entire region and Dasara in this region is called Marnemi. Bear Dance or Karadi Vesha is another popular dance form that is practiced during the Dasara celebrations in Mangalore. Spirit worship or Bhuta Kola is a kind of worship that is performed by the Tuluvas and this worship is done during the night hours. Buffalo race which is known as Kambala is carried out in paddy fields that are filled with water. Cock fight or Konkatta is a favorite sport of the people of Mangalore. 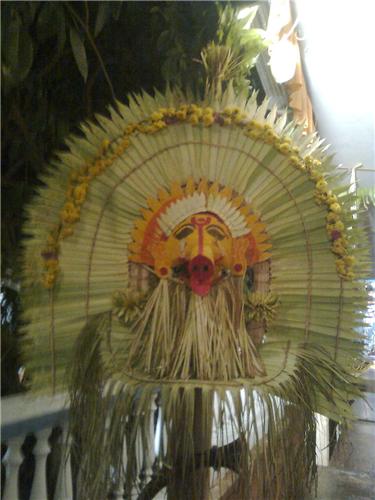 Crafts specimen from Tuluva Culture of Mangalore
This is also an old ritual that is closely related with the temples that are called ‘daivasthanams’ in the rural areas of Mangalore. Kozhi kettu is also spiritual and religious cockfight that is organised and conducted at temples and it is considered to be an important part of the culture and the religious activities in Mangalore. Snake worship called Nagaradhane is also practiced by the Tuluvas in the Tulu region. It is a very popular belief among the Tuluvas that Naga Devatha that is the snake who is worshipped as God goes under the ground and it safeguards the species that live on the earth above.

There are twenty two cultural communities that live in the city of Mangalore and they include Mangalorean Catholics, Goud Saraswat Brahmin, Kudmi, Daivajna Brahmins, Navayats, Gudigar, Kharvi and many more. All these communities are found to speak the different dialects that belong to the Konkani language. Religious festivals such as car festivals that are carried out in different Konkani Temples, Santhmarie festival of the Catholics and the Shigmo festival of the Kudmis are some of the festivals that have kept the Konkani culture alive among the people.

Konkani village or Konkani Gaon located in an area called Shakti Nagar serves as World Konkani Centre and it is spread over an area of 3 acres. This plot was inaugurated on 17th January 2009 and the main aim of this centre was to serve in the form of a noble agency for the overall development and the preservation of the Konkani culture, art and language involving all Konkani people residing throughout the world.

Yakshangana is one kind of dance form and also a drama performance that is practiced during the night hours in Mangalore. Hulivesha or Tiger Dance and Karadi Vesha or Bear Dance are other folk dances that are considered to be very exclusive and they are synonymous with Mangalore. Both the dance forms are practiced during the Krishna Janmashtami and the Dasara festivals in the city. Other forms of worship such as spirit worship called Bhuta Kola and snake worship known as Nagaradhane are very popular among the people of Mangalore. Buffalo race known as Kambala and cockfight known as Konkatta are popular and old sports practiced among the people of Mangalore and they also form a spiritual and religious part of the festivals celebrated in Mangalore.

Oral Epics known as Pad’danas are folk epics in the form of ballads and they are narrated in the Tulu language and even sung by the impersonators community together with rhythmic beats. Kolkai is a famous Beary song that is sung while the Kolata play is enacted. Another Beary song that is sung while a child is put into a cradle is Unjal Pat. Oppune Pat and Moilanji Pat are Beary songs that are sung during weddings. Eucharistic Procession is a religious procession of the Catholics in Mangalore that is led annually on the very first Sunday of the New Year according to Georgian calendar. 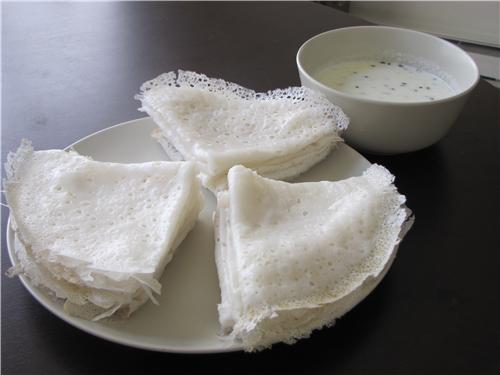 The cuisine of Mangalore is found to be largely influenced by the cuisine of South India. A lot of curry leaves and coconut are used in Mangalorean curry. Mangalorean curry also includes the use of a lot of chilly, garlic and ginger. The fish curry found in Mangalore is famous all over the world because of the taste that it possesses. The Tulu community dishes include Bangude, Kori Rotti, Beeja-Manoli, Pulimunchi, Boothai gasi, Neer Dosa, Patrode and Kadabu. The specialties of the Konkani community comprise Daali thoy, val val, beebe-upkari that is cashew based, ambe sasam, avnas and Kadgi chakko. The Dukra Maas or Pork and the Sanna-Dukra that is idli filled with yeast or toddy are some specialties of Mangalorean Catholics and Mutton Biryani of Mangalorean Muslims are very famous in Mangalore. A great variety of pickles such as happala, puli munchi and sandige are exclusive to Mangalore. A very famous liquor that is found in Mangalore is Khali or toddy which is a type of country liquor that is prepared from the sap of coconut flower. The vegetarian menu of Mangalore is very similar to Uthupi cuisine. Ish is considered to be the staple food of the people of Mangalore because of the fact that Mangalore is basically a town that is located on the coast.

The most famous and largest religion that is found in Mangalore is Hinduism and the Billavas, Bunts, Ganigas and Mogaveeras are the main groups that form Hinduism in Mangalore. remaining sections of Hindus in Mangalore are formed by the Shivalli Brahmins, Kota Brahmins, Sthanika Brahmins, Havyaka Brahmins and the Goud Saraswat Brahmins. Sizeable section of the society in Mangalore comprises of Christians that consists of Catholics speaking Konkani and these Catholics are popularly called Mangalorean Catholics. Mangalorean Catholics form the largest community of Christians in Mangalore. Managalorean Protestants are the Protestants of Mangalore who are found speaking Kannada. Mangalore also consists of a large number of Muslims and the number is comparatively higher than the other cities and towns of Karnataka. Most of the Muslims who live in Mangalore are basically Bearys and they speak Beary bashe which is a common dialect of the Malayalam language. Majority of the Bearys in Mangalore follow Islamic Jurisprudence known as Shafi’i school of Fiqh. Landowners found residing in Mangalore follow Jainism.

The culture, people and the festivals of Mangalore are considered to be the most important and the most integral part of Mangalore. it is a city that is located in Karnataka and it also serves as the main port of India. The culture of Mangalore is also exposed in the flourishing industries, the beaches that are sun-kissed and the exquisite temples of the city. Mangalore is truly a multicultural city and the culture of this city is also highlighted through its handicrafts, dance forms, cuisines, rural sports and festivals.