Cricket coaching in Mangalore has made many youngsters to get into cricket in the professional way. The coaching centers have been providing the best training to them so that an International cricket player from Mangalore will emerge in the upcoming years. Cricket, the one word that makes the kid, youth and older people go crazy with. Cricket is the most famous game that has been widely appreciated and played by each and every citizen in India. Although cricket did not have its birthplace in India, the people celebrate in that way and many best cricketers have emerged from the Indian soil. Many young upcoming talents have been into cricket since their childhood and cricket has become the most wanted passion for every kid in India.

This eleven player game got famous when India bagged the world cup under the captaincy of Kapil Dev during the 1980's. The recent world cup which the Team India won under the captaincy of Dhoni and the team. This has made cricket get into the blood of many citizens of India and many upcoming players are giving their best to get into the Team India and play for the next world cup. The city of Mangalore has many players in different sports and cricket is one among it. Mangalore has got many cricket coaching associations that encourage many young talents to play for Team India. The sports clubs in Mangalore also encourage the cricket players in many ways and they do organize cricket matches between the zonal players in Mangalore. 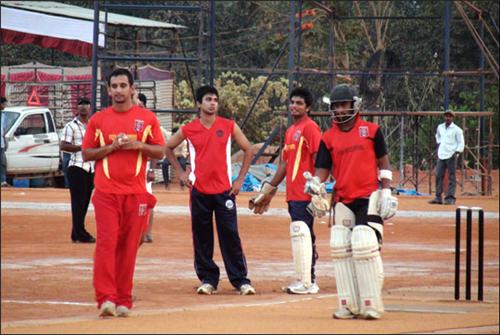 About Cricket coaching in Mangalore

The training in the cricket association is given by the experts and one can get trained specially in one sector. It means if a person is good at fast pace bowling, then they can turn into a professional bowler by training under the experts in bowling category. One can find all the professional equipments that are needed to play cricket in these cricket associations. Many talented young cricketers would love to play for Team India, yet, they would not have the money to purchase the equipments that are needed to train in a professional way. Considering this, the Karnataka Cricket Association has taken a survey and they are bringing up young talents into professional cricket by training them in a good way. The grounds in Mangalore are well maintained to play cricket with them.