Mangalore is said to be the chief port city in the State of Karnataka in India. This city has got a pleasant atmosphere and the whole city gets connected with good transportation facilities. Mangalore also has yet another feature to boast about - its courts. The courts in Mangalore are said to be maintaining the law and order in the city in a very effective way. There are a number of courts in this clean city that strives together to maintain law and order effectively and also makes sure that it performs the legal proceedings in a much faster way to finish off all the pending cases.

The district court and sessions court are located in Kodiyalbail. It comes under the Mangalore City Corporation. The following is the address and contact information.
Phone - 08242443216
Address - District Court Complex, First floor, Kodiyalbail, Mangalore – 575003

The Labor Court in Mangalore was established to bring justice for any labors in their work place. If the labors feel unsatisfied with their company rules or any other thing, they can report about it to the Labor Court and the court does the remaining work. The Labor law and act can help the labors to get their need in the company.

In order to bring a sea of changes among the wedded community in the society and to bring about an awareness about the institution called marriage, the first family court in Mangalore was inaugurated on 23rd May 2011. This family court was a joint initiative by both the State Government and the High Court. This special court offers faster settlement in case of a family dispute and it emphasizes in non adversarial measures. This court also aims at encouraging conciliation and settling the issues of marriage and family at a quick pace. This court's jurisdictions is restricted to MCC or Mangalore City Corporation. It also advises the concerned people to undertake counseling sessions to settle their marriage and family disputes. 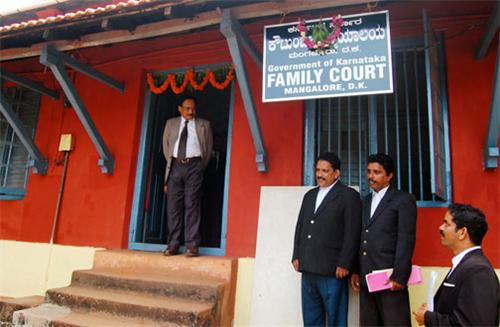 Family Court in Mangalore was inaugurated in the year 2011

The new district court complex nearly took seven years to fully complete the construction work. This new court got inaugurated during the month of July and later in the legal and law proceedings that has been going under the Mangalore City Corporation building will be shifted to this new spacious complex after its final completion. A review meeting took place few months back in which the official informed the press that the works might get finished in a few months of time and they also reported that the delay was due to unexpected materialized reasons. The meeting took place with the district in-charge minister's supervision. It was during the year 2006, the High Court Chief Justice named as Cyriac Joseph and the chief minister of Mangalore H.D. Kumaraswamy laid the foundation for this court complex in Mangalore. Seven years have passed since the work started from the place it was inaugurated. During these seven years, the total estimation of the project got doubled up and this was the main reason for the delay in the opening ceremony of the new district court complex.

Phases of the new district court:
The project was split up into three different phases and it was planned according to it. A total amount of Rs. 1.05 crore got released from the usage of the first phase in this project. It took one long year to complete half the portion of the ground floor. There was a remaining amount standing out from the first phase project. It was used to build the parking slot and the new court complex had its ground floor half completed with a parking slot during the year 2007.

During the second phase, nearly Rs. 2 crore got released for the project. This amount was utilized to develop the remaining works in the ground floor, elevators, changes in the parking place, electricity room and some other small works. The establishment for the next floor got started by using the amount that was allotted for the second phase.

The third phase of the project was a wealthy one and the building needed more amount to continue to construction work. This is why Rs. 18 crore got released and using it all the six floors of the new district court complex was taken up. The court complex was planned to have 30 court halls in it and it was constructed during the third phase of the project. The sixth floor work was completed in the recent days as reported by the officials. Currently, they are working on laying the tiles and the remaining painting works in a full speed. 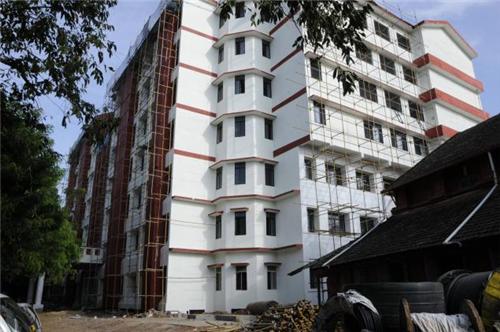 The brand new district court complex equipped top class features in Mangalore
New Court Complex – The pride of Mangalore!
This new court complex has a ground floor with two courts that are made to deal with the family issues. The first floor in this building has the Principal Judge's court hall and the conference all. The second floor of the court building has the administrative blocks and the remaining floors have the 24 court halls. The whole building gets operated using the three elevators that are fixed in the most needed places inside the complex. One of the elevators that can be found on the backside of the court is dedicated to the judges and only they can access and use it. The two elevators in the front side of the Court can be used by the public. The PWD Chief Engineer inspected the building in the recent days and he has suggested to install transparent type of lifts in the court complex. The transparent type of elevators costs nearly Rs. 1.5 crore and it was brought and fixed in the past few days.

The whole complex has a water supply that has been planned for an amount of Rs. 67 lakhs. This amount was used to establish drinking water, fire fighting system and for other safety purposes in the building. The fire fighting system has a separate sump that can hold one lakh liter of water capacity. The overhead tank in this building has a 50,000 liter water capacity tank that can be used for the daily usage. The furnishing work in the court complex was done by using Rs. 8.5 crore. The furnitures are new and it matches well with the big new court complex in the city of Mangalore. The court complex can be opened in a few months of time and many people are waiting to witness this court as it has been constructed using a large amount of money.

The crime rate has been constantly decreased in Mangalore as the court has doing its work properly since the day it got inaugurated in Mangalore.